The 42-acre site of the former Beacon Blanket Manufacturing Co. in Swannanoa has been vacant ever since an arsonist started a fire that burned the mill buildings to the ground in 2003. But the silence that has engulfed the property since that fateful day will soon be broken by the sounds of new construction.

Last June, Symmetry Financial Group, a Swannanoa-based insurance marketing company, announced that it had purchased the property. Symmetry plans to build an approx. 30,000 square foot 3-story corporate headquarters on the site, with groundbreaking expected some time in late summer.

In an effort to honor the historic character of the old red brick Beacon Mill buildings, Symmetry’s new headquarters will feature a brick-and-glass design, giving the building a rustic factory feel with a modern twist. The new headquarters will include an attached conference facility with a 300-400 person capacity. In addition to serving as conference space for Symmetry, this facility may also be available to rent for outside meetings, weddings and other special events.

Other plans for the site include a proposed 118,000 square foot indoor sports complex, which would occupy about 15 acres and be managed by a separate nonprofit corporation that is in the process of being formed. Symmetry’s owners are committed to working with the nonprofit on a land use agreement and option to purchase.

The sports complex would feature multiple courts for basketball, volleyball, cheerleading, pickleball and other sports. The venue is expected to attract large, regional tournaments on the weekends, but would be open to the public at other times. If the necessary financing and approvals can be secured, construction could begin as early as 2021.

Symmetry co-owners Casey Watkins and Brandon Ellison (who also own Native Kitchen), have strong ties to Swannanoa, and see the former Beacon mill site as an important part of the future of this area. They’re hopeful that the proposed sports complex and other future development on the property will attract jobs and spur revitalization in Swannanoa. “The goal is to be thoughtful about what the property is used for,” Ellison said. “Anything that goes in there needs to be of benefit to the community.” 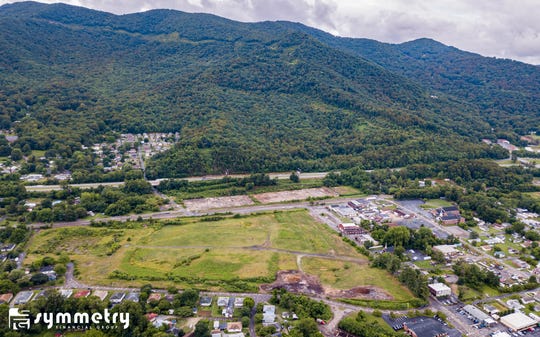 A group of Swannanoa Valley residents hope to breathe new life into the old Beacon Mill site by constructing a 100,000 square foot indoor sports complex on a portion of the vacant property. A $40,000 project feasibility study, recently completed by Florida-based Sports Facilities Advisors, concluded that the sports complex would break even in its third year of operation. This finding of financial viability was critical for the project to move forward, since the sports facility is expected to be operated as a 501(c)(3) nonprofit.

Now that this initial hurdle has been cleared, organizers are shifting gears to focus on raising the funds to pay for the project. It’s anticipated that approximately $25,000,000 will be needed for land and construction, startup costs, and funding of the deficit in the first two years. Funding will be sought from a variety of public and private sources.

The sports complex would draw youth travel teams from throughout the Southeast to compete in weekend tournaments. On weekdays, the facility would serve the local community, with flexible recreation space that could be used for basketball, indoor soccer, pickleball, volleyball, dodgeball, and cheerleading. On-site sports medicine and cardiac rehab facilities are also under consideration.

If the sports complex becomes a reality, organizers hope it will spur growth and revitalization in Swannanoa, including the old downtown area that borders the Beacon Mill site. The mill site has been vacant since 2003, when an arsonist started a massive fire that burned the mill buildings nearly to the ground.