This past December, Swannanoa resident Annie Rice responded to a Craigslist ad offering free roof shingles. The ad had been placed by Jays Roofing of Swannanoa. They had a bunch of leftover shingles stockpiled from roofing jobs, and thought someone might be able to use them.

Annie’s home, which she shares with a disabled child, was badly in need of a new roof. The old roof was falling in, with a gaping hole that leaked badly. Part of her house was completely uninhabitable. Annie thought the Craigslist ad might be the answer to her prayers, but when she called the number, she learned that someone else had beaten her to it. The free shingles had already been claimed. But fortunately for Annie, that wasn’t the end of the story. The owner of Jays Roofing, Jeff Hutchins, heard something in Annie’s voice that day that caused him to ask her a few questions about her situation. Within a few minutes, he found himself offering to come to her home and take a look at her roof.

When Jeff and his Project Manager, Chris Craig, saw how bad the situation was, they knew what had to be done. “I could see how genuine and nice Annie was, and that there was a real need,” Jeff said. Within a few days, a crew from Jays Roofing was at work on Annie’s home, completely rebuilding and replacing her roof, free of charge. They finished the job just before the big December snow arrived. “It was right before Christmas,” Jeff said, “and putting a new roof on the house just seemed like it was the right thing to do.”

Editor’s Note: We want to thank Annie for sharing this wonderful story with us. We hope it touched you as much as it did us. Thank you, Jays Roofing, for seeing a need and responding to it in such a kind and generous way. Jays Roofing has been serving the Swannanoa Valley for over 20 years. They’re located at 2083 U.S. Highway 70, 828-669-5629. Be sure to “Like” them on Facebook.

Swannanoa’s Grovemont community originally had two lakes, neither of which still exists. Lake June, seen in the photo below, was west of Grovemont Square. Lake Wildwood was near the entrance to Grovemont, at the intersection of Old U.S. 70 and Marion Avenue. According to E.W. Grove, who developed Grovemont in the 1920s, the lakes were meant to “add additional beauty and appeal to a setting that would have been attractive without them.”

Does anyone remember these two lakes and how they were used by the community? Was there swimming, fishing, boating? To learn more about the historic Grovemont community, sign up for the Swannanoa Valley Museum’s historic Grovemont tour on Saturday, June 3 (see details in Upcoming Events).

The above is excerpted in part from the book Images of America, Swannanoa, by Anne E. Chesky Smith. The book is available for purchase at the Swannanoa Valley Museum. Photo is courtesy of the museum, Barbara Davidson collection. 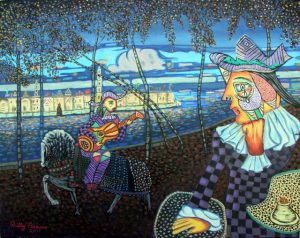 Swannanoa’s multi-talented octogenarian resident, Billy Edd Wheeler, doesn’t let any moss grow under his feet. Billy Edd has had a hugely successful songwriting career, writing numerous hit songs (Jackson and Coward of the County, just to name a couple) that have been performed by the likes of Johnny Cash, Kenny Rogers and Elvis Presley, among many others. But Billy Edd certainly isn’t one to rest on past laurels. In addition to his musical accomplishments, he’s an author, playwright, composer of musicals and a folk opera, and an artist. Seven Sisters Gallery, located at 117 Cherry Street in Black Mountain is currently showcasing Billy Edd’s paintings in its gallery exhibit. The show continues through August 28, 2016.

Swannanoa Stories: Baseball in the Valley 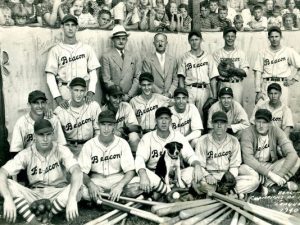 Now that springtime is upon us and baseball season is underway, we thought it would be a good time to share this historic photo of the 1940 Beacon Blanketeers championship baseball team. The Blanketeers played in the Industrial League, and fielded some very talented teams, with professional-quality athletes drawn from the ranks of Beacon’s mill employees. The Blanketeers home field was located in Beacon Village, on the site of what is now a Habitat for Humanity community. If you listen very carefully, you may still be able to hear the crack of the bats and the roar of the crowds . . . . Photo courtesy of Pack Library’s North Carolina collection.

To read a Rob Neufeld “Visiting Our Past” Asheville Citizen-Times article about the Beacon Blanketeers, click here.