Archive for Swannanoa Habitat for Humanity 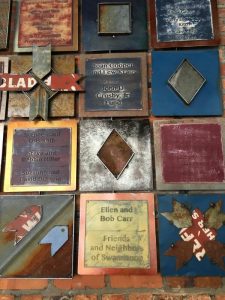 The celebration culminated with the unveiling of a donor recognition wall in the Habitat ReStore: a metalwork “quilt” created by local metal artist David Earl Tomlinson. Friends and Neighbors of Swannanoa (FANS) is honored to be recognized with a quilt panel (bottom center) on this beautiful work of art. FANS partnered with Habitat in 2014 to help recruit donors and volunteers for construction of the Sweet Home Swannanoa house, one of 17 homes in Swannanoa’s new Habitat neighborhood in Beacon Village. Although FANS’ name appears on the quilt panel, the recognition really belongs to the many “friends and neighbors” in the Swannanoa Valley, whose generous donations of money and time helped make the Sweet Home Swannanoa house a reality. Thank you! 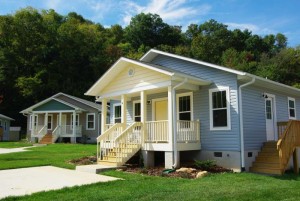 For almost two years, volunteers have been swinging hammers and pounding nails to help build a new 17-home Habitat subdivision off Dennis Street in Swannanoa’s Beacon Village neighborhood. Now that the construction dust has settled, it’s time to come together and celebrate the spirit of giving and volunteerism that helped create this vibrant and diverse new community.

The public is invited to gather at the Habitat site on Tuesday, December 9, at 3:30 pm to see the completed neighborhood, congratulate the new homeowners, tour the final four houses, and enjoy some refreshments. The event is called “Let us Gather,” and will include the dedication of the Sweet Home Swannanoa house, as well as two homes built by an anonymous donor and a fourth built in recognition of support from Buncombe County.

Construction is nearly complete on Habitat for Humanity’s new 17-home subdivision, located off Dennis Street in the Beacon Village neighborhood. The worksite has been a hub of activity ever since construction started a year and a half ago, with hundreds of volunteers contributing thousands of work hours to help make the dream of homeownership a reality for 17 very deserving families.

The Swannanoa community is invited to gather from 3:30 – 4:30 p.m. on Tuesday, December 9, for a celebration and dedication of the new Habitat neighborhood. The festivities will include a dedication of the final four homes (the Sweet Home Swannanoa house being among them) and tours of several of the finished houses. Come see the completed neighborhood, meet Habitat families, enjoy the fellowship of other Swannanoa residents and Habitat supporters, and congratulate the new homeowners! 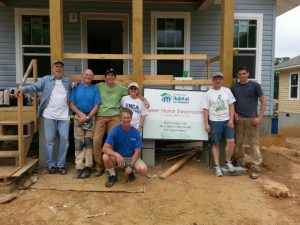 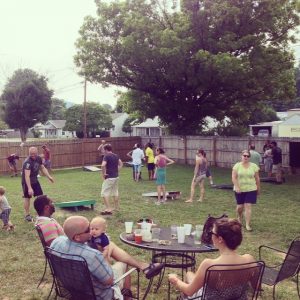