At a meeting at the Bee Tree Fire Station on November 14, Swannanoa residents asked questions and gathered information from representatives of Chemtronics, one of the companies potentially responsible for cleanup efforts at the Swannanoa Superfund site, located off Old Bee Tree Lake Road. The site was formerly used as a chemical weapons manufacturing facility, and was placed on the federal Superfund list in 1982. Although cleanup at the site has been ongoing for many years, additional contaminants were found at new locations on the site last year. Investigations are underway to determine the extent of the new contamination and to make recommendations for remediation. It’s expected that there will be a community meeting early in 2014 to discuss the results of the investigation. 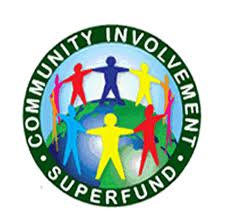 In February 2013, shortly after the EPA announced the discovery of the new contamination, Swannanoa residents Superfund Site – Community Involvement Logo formed a Community Advisory Group (CAG) to serve as a liaison between the community and the governmental agencies and companies involved in the cleanup. The CAG hosts regular monthly meetings open to the community, including the most recent meeting on November 14, which included representatives from the Environmental Protection Agency (EPA), the NC Department of Environment and Natural Resources, and Chemtronics, the current owner of the site. Two other prior owners of the site, Celanese and Northrup Grumman, are also “potentially responsible parties” (or “PRPs”) in the cleanup.

One of the main topics of conversation at the November 14 meeting was a recent proposal by the PRPs to reduce the boundary of the Superfund site from 1065 acres to 535 acres. The PRPs have asked that this acreage be excluded because there is no evidence it was ever used or impacted by activities on the site. If the boundaries are re-defined, the 530 excluded acres could be used for other purposes. Rob Fox, an environmental lawyer representing Chemtronics, told meeting attendees that the land could possibly be used for sustainable forestry, and that a conservation easement might be considered. He also said that any deeds for the land would contain restrictions prohibiting residential use of the property, or using groundwater for potable purposes. EPA representative Jon Bornholm confirmed that excluded acreage could quickly be brought back into the Superfund boundary if contamination was subsequently found there.

The next CAG meeting will take place on Thursday, January 9, at 6:30 p.m., at the Bee Tree Fire Station, 510 Bee Tree Road. The public is invited to attend. The CAG has recently approved bylaws, and is working on an application for 501(c)(3) status. To learn more about the CAG and the Chemtronics Superfund site, please click here.