Did You Know… That There’s Another Swannanoa? 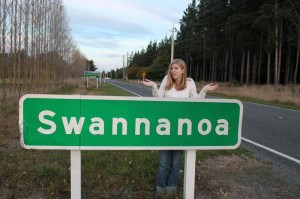 Yes, that’s right. As special as we all know Swannanoa is, we’re not the only place that bears this beautiful name. If you hop on a plane and settle back for a very loooong flight, you can visit the village of Swannanoa, New Zealand, located about 40 miles from Christchurch.

According to Wikipedia, Swannanoa, NZ was originally a farming village and has a population of about 1,000. There’s a small primary school in the community that hosts an annual Country Fair attended by 15,000 people! Not bad for such a small town. But Swannanoa’s main claim to fame is the road that runs through the middle of the town – it’s dead-straight and about 10 miles long. As you can imagine, this has made Swannanoa a popular location for speed trial events. In fact, the World Land Speed Record for motorcycles (184.83 mph!) was set at Swannanoa, NZ in 1955.

The most interesting tidbit in the Wikipedia article about Swannanoa, NZ is this:

The name Swannanoa originated from American John Evans Brown (aka “Yankee Brown”) who settled on land [in New Zealand] and named it after a North American Indian settlement from his homeland.

Another Wikipedia search reveals that, although John Evans Brown (1827-1895) was born in Pennsylvania, his father owned large tracts of land in and around Asheville. After living in New Zealand for many years, and even serving as a member of the New Zealand parliament, Brown returned to his father’s land near Asheville, where he made a fortune in mica mining. So as it turns out, the name Swannanoa was exported all the way from the mountains of North Carolina to New Zealand!