Live Theater in the Valley This Sunday (6/11)

Love Makes A Home, an original one-woman play written by local playwright Kiesa Kay, debuts this Sunday, June 11, at 3 p.m., at White Horse Black Mountain, 105c Montreat Road. The play tells the story of Daniel Boone’s wife, Rebecca Boone (portrayed by Barb McEwen), who shares her homespun wisdom and meaningful memories as she chops wood, cooks stew, and does her mending on a winter evening in 1811.

Rebecca didn’t get the luxury of a home she could keep, but her trail-blazing adventures made up for what was missing. She walked through Virginia, North Carolina, Tennessee, West Virginia, and Kentucky before she found her final rest in Missouri. She raised ten biological children and adopted six more after her child-bearing years had ended. As Rebecca weaves linen, she recalls how her husband, legendary American frontiersman Daniel Boone, spent as many as two years at a time lost in the woods. The courageous hunter also managed to lose all the family’s money and land about as fast as he acquired it. It was up to Rebecca to take care of the family and teach them all to hunt and forage so they would have food and shelter, too.

Rebecca had little bitterness and no guile. Blessed with a supportive family and an indomitable spirit, Rebecca revels in an evening alone as she shares her memories and secrets with those lucky enough to be in the audience.

Throughout the play, Rebecca’s stories are interspersed with old-time music, selected and performed by renowned musician Bruce Greene, a member of the International Old Time Fiddlers Hall of Fame. Greene, a descendant of the Boone Family, has traveled extensively through the areas frequented by the Boone’s, collecting and preserving thousands of old-time tunes that would have been lost forever without his efforts. In Love Makes A Home, the interplay between Barb McEwen’s acting and Greene’s masterful fiddling becomes a kind of duet, as Rebecca Boone’s life story unfolds.

The show is directed by Swannanoa resident Kay Wise-Denty, who recently directed the highly acclaimed production of The Queen of Bingo at the Black Mountain Center for the Arts.

Tickets are $10 in advance and $12 at the door. For more info, or to purchase advance tickets, visit www.whitehorseblackmountain.com. 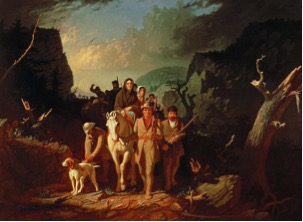 Painting of the Boone’s in Cumberland Gap,
by George Bingham.