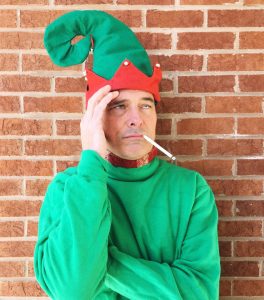 The Santaland Diaries, an irreverant holiday comedy written by David Sedaris, comes to the stage at the Black Mountain Center for the Arts for six performances, beginning on Friday, December 13.

When a down-on-his luck wannabe actor arrives in New York City at the end of the year, the only employment he can find is at Macy’s department store, working in Santaland for the holiday season as a reluctant, but relentlessly cheerful, elf. Newly christened “Crumpet”, our clever anti-hero, shares his observations of the mayhem in front of and behind the scenes during one chaotic December, from aggressive parents to drunken Santas and flirtatious actors. Will Crumpet find a moment of pure Christmas spirit? Will he end up in Santa’s cottage with Snowball the elf? Will he escape with his life on Christmas Eve before being torn apart by enraged customers? Come see the play and learn the answers to these and other questions!

Performances will take place on the weekends of December 13 – 15 and 20 – 22. The show begins at 7:30 p.m. on Fridays and Saturdays, with a 2:00 p.m. matinee on Sundays. Tickets are $20 and can be purchased at www.blackmountainarts.org/theatre. The Santaland Diaries contains mature content and is for adults only.