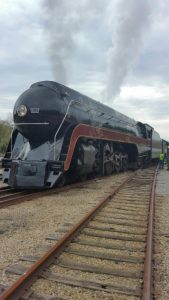 Crowds lined the route from Spencer, NC to Asheville on Sunday, April 10, as an historic steam engine, pulling restored passenger cars, made its way through the mountains to Biltmore Village. The Norfolk & Western Class J #611 steam engine was built in Roanoke, VA in 1950. It’s the last surviving member of the J Class, widely considered to be the greatest passenger steam engines ever built. Restoration of the #611 was completed in 2015.

The one-day excursion from Spencer to Asheville was sponsored by the NC Transportation Museum. About 1,000 people made the round-trip journey, and thousands more watched the train pass from vantage points all along the route. In the Swannanoa Valley, hundreds of people waved, cheered, and took photos and video as the train steamed past. It was a great day for train and history lovers of all ages!