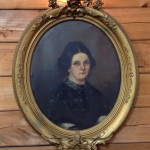 This rare 19th century portrait of Elizabeth Patton-Crockett, Swannanoa native and wife of the iconic frontiersman, Davy Portrait of Elizabeth Patton Crockett Crockett, was discovered in the attic of the now-razed Patton family home. The portrait had hung in the home’s library since the early 1800s, and was apparently placed in the attic during a renovation. It recently sold at auction in Virginia for $10,500.

Elizabeth Patton was one of the youngest children of Robert Patton, patriarch of a prominent and influential Swannanoa family. Elizabeth’s first husband, James, fought in the Creek Indian War with Davy Crockett, and was mortally wounded. As he lay dying, James asked Davy to return his personal belongings to his wife Elizabeth. Davy Crockett obliged, and was apparently impressed enough with Elizabeth that he later traveled to Swannanoa to court her after his own wife passed away. Davy and Elizabeth were later married.

To learn more about the courtship and marriage of Davy Crockett and Swannanoa’s own Elizabeth Patton, please click here.