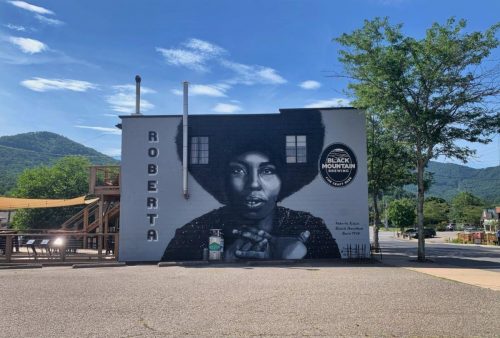 The Swannanoa Valley has some new public art in the form of a giant outdoor mural depicting an image of internationally acclaimed singer-songwriter Roberta Flack, who was born in Black Mountain. The mural was completed in July and covers an exterior wall on the Black Mountain Brewing building, located at 131 NC Highway 9, off Broadway Avenue. Artist Scott Nurkin created the artwork as part of his North Carolina Musicians Mural Project, honoring influential artists in their NC hometowns.

Flack lived in Black Mountain until her family moved to Virginia when she was nine. She’s one of the most famous people born in the Swannanoa Valley, having earned the distinction of being the only solo recording artist to win the Grammy Award for Record of the Year in two consecutive years: for “The First Time Ever I Saw Your Face” in 1973, and “Killing Me Softly with His Song” in 1974. She was inducted into the North Carolina Music Hall of Fame in 2009, and received a Grammy Lifetime Achievement Award in 2020.

Black Mountain Brewing launched an online fundraiser and raised $15,000 to pay for the mural.