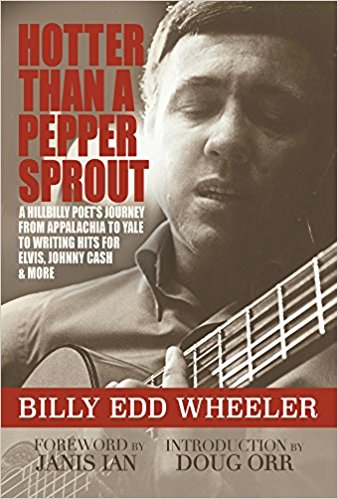 Swannanoa resident Billy Edd Wheeler has led a fascinating life, and now you can hear about it straight from the horse’s mouth. Billy Edd’s new memoir — Hotter Than a Pepper Sprout: A Hillbilly Poet’s Journey From Appalachia to Yale to Writing Hit Songs for Elvis, Johnny Cash & More — is now available for pre-order on Amazon.

Here’s the Amazon write-up about Billy Edd and his new book:

Award winning songwriter, musician, author, playwright, poet, visual artist, and Appalachian Renaissance man Billy Edd Wheeler is best known for penning “Jackson,” which was popularized by Johnny Cash and June Carter with their Grammy-winning recording from 1967. In addition to his own albums and singles as a highly regarded singer/songwriter (including the Top 5 hit, “Ode to the Little Brown Shack Out Back”), Billy Edd has penned numerous songs for artists such as Elvis Presley, Judy Collins, The Kingston Trio, Neil Young, and Kenny Rogers, whose version of “Coward of the County” became a #1 hit and spawned a TV movie. In Hotter Than a Pepper Sprout Wheeler crafts a memoir populated by a fascinating cast of characters he encountered on his journey from the coal country of Boone County, West Virginia, where he was born and raised, to North Carolina’s Warren Wilson College, to Berea College in Kentucy, and on to his graduate studies at Yale, where he honed his skills as a playwright. During his tenure at Yale, Wheeler made trips to New York, where he landed a job writing songs in the fabled Brill Building for the legendary songwriting and publishing team of Leiber & Stoller. Songwriting changed his life, bringing him a long lasting career that saw the birth of classic tunes such as “The Reverend Mr. Black,” “High Flyin’ Bird,” “The Coming of the Roads,” “It’s Midnight,” “Coal Tattoo,” and others. Peppered with the folksy wisdom of his beloved Appalachia, Hotter Than a Pepper Sprout is like pulling a chair up next to the Nashville Songwriters Hall of Famer by a warm fire. You won’t want to leave.

The book has an introduction by Doug Orr, former President of Warren Wilson College, and a foreward by singer-songwriter Janis Ian.