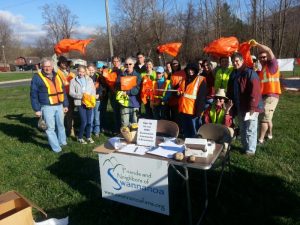 About thirty-five enthusiastic Swannanoa residents turned out on Saturday, April 5, for a productive morning of litter-pickup along Swannanoa’s roadways. Thanks to the efforts of these volunteers, the annual Swannanoa Sweep community cleanup, sponsored by Friends and Neighbors of Swannanoa (FANS), netted close to 150 large bags of trash. That’s a whole lot of junk that’s no longer littering our community!

In addition to the smaller items, the haul included a bathroom sink, two couches, and numerous tires and other assorted debris.

There were smiles and high-fives all around as the crew finished up the morning’s work, and marveled at the pile of trash they’d collected. It’s amazing what a hard-working group of folks can accomplish in only three hours. Thank you volunteers! 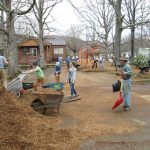 The Swannanoa Library was also the recent beneficiary of a volunteer workday. About 40 people gathered on Saturday, March 29, to give the library’s park and playground a much-needed facelift. The crew included students from Warren Wilson College and Owen High School, who worked alongside volunteers from the Friends of the Swannanoa Library and the Swannanoa community. The rain didn’t deter this hardy group of folks from their task. When the day was done, a mountain of mulch had been spread around the playground equipment and park. Volunteers dug out the quarter-mile of walking paths to restore their original width, and re-furbished the paths with thirty-five tons of gravel screenings. And the large sandbox, which had been unusable for quite some time, was filled with 200 bags of new sand. The work was barely done before the kids showed up to start playing!

Many thanks to all the volunteers, and the following businesses who supported the workday: Grove Stone and Sand for a donation of gravel screenings; Madden’s Ace Hardware for a donation of playground sand; and Subway, Chowtime Pizza and Athens Pizza for donating lunch items for the volunteers. A special shout-out goes to Warren Wilson College for loaning a tractor and other equipment for the day.

The Community Works
When We Work Together!