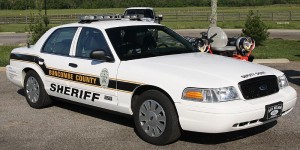 The effort began with a July 24 community meeting at the Bee Tree Fire Station, attended by Sheriff Van Duncan and members of the COPS team. During this meeting, the COPS team gathered input from residents about public safety issues, and used this input to develop a plan of action. Key concerns identified by residents included an uptick in drug activity and vehicle, home and business break-ins.

During the 30 days that the COPS team worked in the Swannanoa community, 33 arrests were made, 61 citations and warnings were issued, and 12 additional arrests were made under outstanding warrants. In addition to meeting with residents and stepping up patrols and checkpoints, the COPS team worked with local inmates to paint over graffiti (with paint donated by Madden’s Ace Hardware) and cut back overgrown foliage on street corners and intersections.

The Sheriff’s Office has offered to assist Swannanoa residents interested in forming Neighborhood Watch groups. An informational meeting will be held on Thursday, September 19, at 6:00 p.m., at the Bee Tree Fire Station, 510 Bee Tree Road. Residents of Beacon Village and Grovemont have already expressed interest.

Many thanks to the Buncombe County Sheriff’s Office for making our community a safer place!