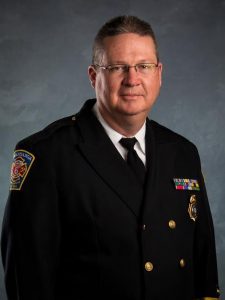 Swannanoa’s Fire Chief, Anthony Penland, was recently named 2015 Career Fire Chief of the Year by the Western North Carolina Association of Firefighters. Penland started his career in 1990 as a volunteer firefighter with the Swannanoa Fire Department, and worked his way up through the ranks, eventually becoming Chief in 2001. Chief Penland was Incident Commander for the Beacon Mill fire in 2003, overseeing the efforts of multiple fire departments and hundreds of firefighters involved in battling the blaze. We’re fortunate to have such a dedicated Fire Chief, and such a competent and professional Fire Department, in our community. Congratulations Chief Penland!