Swannanoa on the Silver Screen

Swannanoa is in the limelight again – this time as a featured location in Clint Eastwood’s newest movie, Trouble With the Curve. The movie tells the story of an aging baseball scout for the Atlanta Braves (Clint Eastwood) who travels to North Carolina to check out a promising high school slugger. Turns out the hot prospect who’s set to be recruited as the Braves’ number one draft pick is a student at none other than Swannanoa High School! 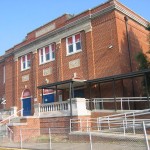 An internet search turned up no clues as to why Swannanoa and Swannanoa High School came to be featured so prominently in the movie.  If anyone knows, please contact us with that information.  If you’d like to see the movie, it’s currently playing at the Carmike Theater.

Swannanoa has a long real-life baseball history.  When Beacon Manufacturing came to town in the 1920s, the Owen family built a company town around the mill, which included recreation activities for those who lived nearby and worked for Beacon.  Almost all the boys in Swannanoa played baseball for one of the Beacon teams.  The Owens were even rumored to have hired mill workers who were talented enough baseball players to beef up their official team, the Beacon Blanketeers.

The town baseball diamond, known as Coman field, was located in the old Beacon Village.  The field sat vacant for years, overgrown and neglected, but this month has been cleared to make room for the 17 homes that Habitat for Humanity plans to build on the site.

At least one Swannanoan made it big in the major leagues.  Sammy Stewart pitched for the Orioles and Red Sox from 1978 until 1987.  Stewart grew up in Swannanoa and graduated from Owen High School.  During his major league career, he was known as the “Throwin’ Swannanoan.”