A Brief History of Swannanoa Schools 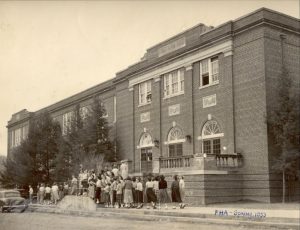 Many of the first formal schools in the Swannanoa Valley were funded by the Presbyterian Board of Home Missions in the mid- to late 1800s. Until the schools were consolidated in 1919, children who were able to attend school generally walked to the nearest one- or two-room schoolhouse. These small schools served communities throughout the Valley, including Bee Tree, Riceville and Christian Creek.

The consolidated school burned in the mid-1920s, and new schools were opened for students of different ages and grades. The above photo is the old Swannanoa High School, as it looked in 1953. Located on Old U.S. 70, the building still stands and is now home to Community High School, an alternative public school with students from all over Buncombe County.