Living on the banks of a river is beautiful, but it’s also unpredictable. Floods have plagued homes and businesses in Swannanoa since the first recorded flood in 1796. Floods in Swannanoa have resulted in tragic deaths, damage to railroads and bridges, compromised water supplies, ruined homes, and devastated crops. The most recent major flood occurred in 2004, following record rainfall from the remnants of Hurricanes Frances and Ivan. 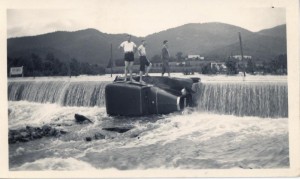 In the photo above, three men stand on a car tipped over during the August 20, 1940 flood of the Swannanoa River. (Click photo to view larger image.)