Swannanoa Stories: A River Runs Through It 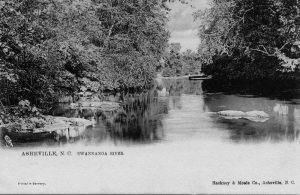 The exact origin of the name “Swannnanoa” is somewhat unclear, but many believe that it derives from a Cherokee word meaning “beautiful river.” For thousands of years, native Americans used this area as a hunting ground, attracted by the river, the fertile soil and the abundant wildlife. In 1776, General Griffith Rutherford raided the valley to keep Cherokee Indians from joining forces with the British during the Revolutionary War. After the war ended, soldiers who remembered the beauty and abundance of the valley returned to settle on the banks of the river.

Although the Swannanoa River is not as pristine as it once was, it remains a place of incredible beauty. The river is a presence in each of our lives — whether we’re birding, hiking, fishing, wading, swimming, tubing, kayaking, just lingering on its banks or watching it meander from the windows of our car. Let’s join hands to protect this important part of our heritage, to maximize its potential for our community, and to keep it clean and beautiful for generations to come. If you’re interested in getting involved with river issues, please send us an email.