Warren Wilson College . . . Then and Now 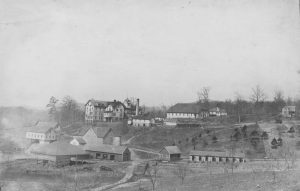 In 1894, the women’s home mission board of the Presbyterian Church opened the Asheville Farm School on the westernmost side of Swannanoa to educate mountain boys in the agricultural sciences. The first year, the school had 25 students in grades 1 – 3. Higher grades were added as enrollment increased. In 1942, the farm school merged with the all-girls Dorland-Bell school, near Hot Springs, to become a residential secondary school called Warren H. Wilson Vocational Junior College. The photograph to the left shows the original Asheville Farm School campus and buildings around 1900.

Fast forward to 2014, and Warren Wilson is now a 4-year liberal arts college, offering 40 majors to 1,000 students from 48 states and 20 countries. The Fiske Guide to Colleges 2014 has named Warren Wilson one of the nation’s “25 Best Buys” among private colleges and universities, on the basis of the quality of its academic offerings in relation to the cost of attendance. Sierra Magazine has consistently given Warren Wilson top rankings on its annual list of “Coolest Schools.” And Newsweek has selected Warren Wilson as Number 3 on its nationwide list of “Most Service-Oriented” colleges and universities.

The photograph below shows what the beautiful Warren Wilson College campus looks like today. 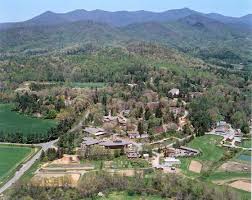 Editor’s Note: With permission of the author, the above is excerpted in part from the book Images of America, Swannanoa, by Anne E. Chesky Smith. The book is available for purchase at the Swannanoa Valley Museum, 223 West State Street, in Black Mountain. Cost is $22 ($20 for museum members).