>> NOTE: This concert has been moved to the Bee Tree Fire Station due to the forecast of temperatures in the 50s and the possibility of rain. The grand re-opening of the Swannanoa Library basement book sale will precede the concert, from 3 – 6 p.m. <<
Map to fire station. 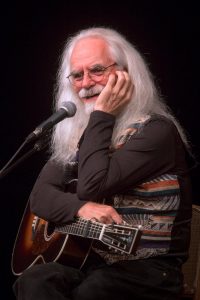 His original songs and stories have been described as “Appalachian grit and wit.” He’s a Featured Teller at the National Storytelling Festival, and has toured throughout the U.S., the British Isles, and much of Europe. Michael’s performance at the spring Groovin’ concert takes place in Grovemont Square, adjacent to the Swannanoa Library, on Friday, April 5, at 6:30 p.m. >>CONCERT MOVED TO BEE TREE FIRE STATION.<<

The grand re-opening of the newly renovated Swannanoa Library basement book sale will also take place on Friday, from 3 – 6 p.m., at the library, 101 West Charleston Avenue. Come see the improvements and browse the thousands of used books available for purchase at incredibly low prices. After you’ve stocked up on books, head to the Bee Tree Fire Station to see Michael Reno Harrell.

Proceeds from the book sale benefit the Friends of the Swannanoa Library. See you there!