Bear Encounters on the Rise in Swannanoa 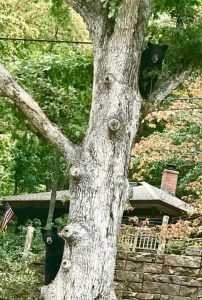 This fall has seen a dramatic increase in bear activity in our area. Many residents are reporting bear sightings far in excess of the norm, including some too-close-for-comfort encounters in neighborhoods and around homes. Fall is, of course, the time when bears are working hard to put on weight for the winter months. Heavy rains have contributed to a shortage of acorns, nuts, berries and other fruit, which is driving the bears into neighborhoods in search of food. One Swannanoa resident recently saw 11 bears (yes, 11!) foraging for acorns around several large oak trees in a small area between their property and their neighbor’s property.

In September, a Swannanoa woman was injured by a bear while walking her leashed dog near her house after dark. The woman shouted to scare off three bear cubs rooting through a neighbor’s trash that had been left out for pickup the following morning. The woman had not seen the mama bear, who approached her from behind and repeatedly clawed and scratched her as she ran back to her home. She was treated at Mission Hospital for serious but non-life-threatening injuries. The mother bear was trapped and subsequently euthanized, while the three cubs, who were deemed old enough to survive on their own, were relocated to a remote area.

Encounters like this remind us that we live in bear country, and need to take steps to keep ourselves and the bears safe. The NC Wildlife Commission emphasized that incidents like this are extremely rare, and that this particular attack was protective and not predatory.

Feeding bears, whether intentionally or unintentionally, is one of the biggest contributors to bear problems. Unsecured trash cans left out overnight are a major attractant to bears. For this reason, the NC Wildlife Commission recommends that garbage and recycling not be placed outdoors until the morning of pickup, unless bear-resistant containers are used. This is a minor inconvenience, but complying with this recommendation will greatly reduce the incidence of “problem bear” encounters, and will keep all of us (including the bears) safer.