Good Things Are Growing At the Swannanoa Community Garden 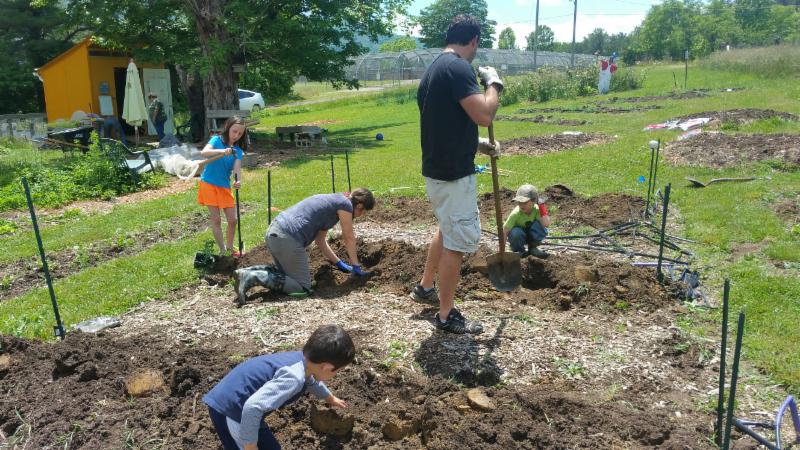 The Swannanoa Community Garden has flourished this summer, thanks to favorable temperatures, abundant rain, and lots of hard work by dedicated volunteers. The addition of a large flower garden, planted by volunteer Kara Dillow, has brought in numerous pollinators and beneficial insects that have helped keep the garden healthy. As an added bonus, Dillow has made beautiful arrangements with the sunflowers, tulips, irises, zinnias, and other colorful flowers that are now growing in the garden. The arrangements are donated to a nonprofit organization that distributes them to hospitals and other groups as a gift of beauty and kindness.

So far this growing season, the garden has produced 1100 pounds of vegetables (a new record!). Tomatoes, okra and watermelon are still ripening, and will increase the total poundage by a considerable amount. Other varieties of successful produce include beans, potatoes, and lettuce. Each year, the garden crew experiments with new vegetables and varieties – this year, kohlrabi, turnips and tomatillos were grown for the first time.

A new garden pavilion is in the process of being constructed, thanks to a $3,000 grant that was recently awarded to FANS by the Black Mountain – Swannanoa Valley Endowment Fund, an affiliate of The Community Foundation of Western North Carolina. Several volunteers have stepped up to design and build this much-needed addition to the garden, which will be used as classroom and meeting space for schools and groups, as well as a gathering space for garden volunteers.

The Swannanoa Community Garden is a “giving garden;” almost all produce grown in the garden is donated to organizations serving our neighbors in need. Volunteers are the backbone of the garden, and more help is always needed. If you’d like to lend a hand or make a donation, please contact garden manager Sandy Drake at 828-581-9020 or sandyjean51@gmail.com. The Swannanoa Community Garden is sponsored by Friends and Neighbors of Swannanoa (FANS), and is located on Clover Lane, off Lake Eden Road.