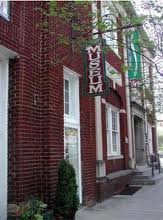 It was on the grounds of the present-day Christmount Conference Center in Black Mountain that Guastavino built his retirement home in 1895. His house, no longer standing, was known locally as the “Spanish Castle.” It was a ramshackle three-story whitewashed wooden house with a central bell tower. Though grander than local farmhouses, the house did not exhibit the cohesiveness and craftmanship seen in many of the famous Beaux-Arts buildings where Guastavino left his mark, including the Boston Public Library, Grand Central Terminal, Grant’s Tomb, the Great Hall at Ellis Island, Carnegie Hall, the Smithsonian, and the U.S. Supreme Court, as well as the Biltmore Estate and Basilica of St. Lawrence in Asheville.

The Swannanoa Valley Museum’s temporary Guastavino exhibition was funded by the National Endowment for the Humanities and originally designed for the Boston Public Library. The exhibition was also mounted in New York City and Washington, D.C., before being donated to Christmount. The exhibit documents Guastavino’s work, along with his local accomplishments and presence, and features items in the museum’s collection, including the bell from atop the Spanish Castle, Mrs. Guastavino’s black mourning cape, and bricks and tiles stamped with Guastavino’s logo.

The building that houses the museum is itself historic. Formerly Black Mountain’s fire house, it was designed in 1921 by Richard Sharp Smith, the Biltmore Estate’s supervising architect. The 2016 museum renovation was an effort to stabilize the building, bring it back to Smith’s original design, and add features like climate control and public restrooms.