Postcards From the Past

Article courtesy of Mary McPhail Standaert
In the mid-1780s, Samuel Davidson crossed the Blue Ridge from Old Fort and settled along the Swannanoa River near Christian Creek. Slain by an Indian hunting party within months, he was buried on Jones Mountain. Around 1787, his twin brother Major William Davidson and sister Rachel Davidson Alexander and their families followed, settling along the Swannanoa River at the mouth of a tributary they called Bee Tree Creek (Owen Park), after finding a fallen black gum tree full of honey. The community became known as the Swannanoa Settlement.
The Davidson and Alexander families stayed and prospered; their descendants and names are still prominent throughout the valley. In 1819, George Alexander built an inn along what is now Old Highway 70. For 130 years, Alexander’s Inn served as a post office, lodging for stagecoach passengers on the Morganton to Asheville run, and a boarding house for “summer people.” Closing to the public in 1949 due to the death of Carrie Alexander, the 200-year-old building is the oldest structure in Buncombe still owned and inhabited by descendants of the original family. 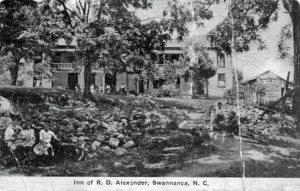