Postcards from the Past

Dr. Edwin Wiley Grove reshaped the face and economy of Swannanoa and Asheville during the first three decades of the 1900s. Born in Tennessee in 1850 to parents of modest means, Grove was a Presbyterian, prohibitionist, philanthropist, pharmacist, promoter, patent medicine mogul and entrepreneur.

Dying unexpectedly in 1927, his death certificate listed his occupation simply as “Capitalist.” Grove’s income was once estimated at one million dollars a year. His fortune was largely derived from two patent medicines he formulated and marketed: Grove’s Bromo-Quinine Pills, the first pill for the common cold, and Grove’s Tasteless Chill Tonic, which “masked” the bitter taste of the anti-malarial drug quinine.

Designed with two lakes and recreational facilities, the upscale housing project was cut short by Grove’s death. Only 19 homes were completed. Designed in the English style, Grovemont homes were purchased by Beacon Manufacturing executives as they relocated from New Bedford, Massachusetts. St. Margaret Mary Catholic Church was dedicated October 11, 1936. Many relocating from New England were of the Catholic faith and St. Lawrence Catholic Church in Asheville was 20 miles distant. Seventeen of the original homes remain, the lakes are no more.  Today, the Swannanoa Library anchors Grovemont Square. 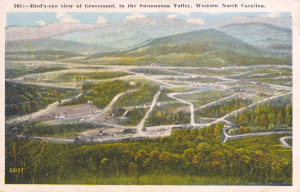 Bird’s-eye view of Grovemont. Postcard courtesy of the Joe and Mary Standaert collection.