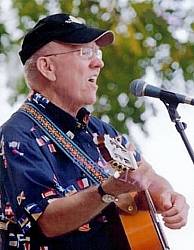 Swannanoa resident, Warren Wilson alum, and country music legend, Billy Edd Wheeler, has added another item to his list of lifetime accomplishments — published novelist. Longhorn Publishing has just released Billy Edd’s new novel, The Boston Cowgirl, a genre- and gender-bending account of a spoiled and privileged 16-year-old Boston girl who is literally tossed into a life of hardship in the wild and rugged west of the 1880s.
A novel with almost universal appeal, The Boston Cowgirl is likely to be of particular interest to young adults and teens, though anyone who enjoys American history, loves the outdoors, or likes novels with plenty of raw emotional tugs, will find it compelling.
Billy Edd is a Swannanoa treasure and a true Renaissance man. He’s been inducted into several country music halls of fame, and is best known for his long string of chart-topping country music songs, including “Jackson” (recorded by Johnny and June Carter Cash), “Coward of the County,” and “Ode to the Little Brown Shack Out Back.” He’s also an accomplished artist, a poet, and the author of a number of books on Appalachian humor, as well as several long-running plays (including “Hatfields and McCoys,” now in its 47th year). His memoir, Hotter Than A Pepper Sprout, was published in 2018.
The Boston Cowgirl is available through Amazon.com. You can learn more about Billy Edd at billyeddwheeler.com.
Categories Other Swannanoa News, Recent-News-2