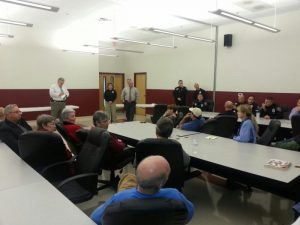 Representatives from the Sheriff’s Office discussed this and COPS Meeting at Bee Tree Fire Station other issues with residents at a community meeting at the Bee Tree Fire Station on December 5. In response to resident concerns, a Community Oriented Problem Solving (COPS) team from the Sheriff’s Office had been working in Swannanoa for 30 days in November and early December. At the December 5 meeting, the COPS team reported on their findings, including the recommendation for a new substation.

Other issues addressed by the COPS team during the 30-day period included drug activity, speeding in the Grovemont neighborhood, and traffic safety issues at Asheville Christian Academy and Owen Middle School. The COPS team reported that the Sheriff’s Office is working with the NC Department of Transportation on possible traffic control solutions at these locations. Additionally, COPS team members were able to serve 37 outstanding warrants during the 30-day period. Six arrests were made and methamphetamine and marijuana were seized. This is the third time a COPS team has been assigned to Swannanoa in the past two years.

At the December 5 meeting, several residents also raised concerns about cars traveling at excessive speeds through Swannanoa’s buinsess district on US 70. The Sheriff’s Office agreed to look into what would be involved in lowering the speed limit from 45 to 35 along the section of US 70 between Riverwood Road and Whitson Avenue.

If you have safety concerns that you’d like to discuss with the Sheriff’s Office, please contact Darrell Maxwell, the Sheriff’s Community Enforcement Officer assigned to Swannanoa. He can be reached Monday – Friday during normal business hours at darrell.maxwell@buncombecounty.org or 230-2829. If you need to speak to someone after hours, or would like to report suspicious activity or a crime, please call the Sheriff’s Office at 250-6670.

To protect the safety of personal belongings, the Sheriff’s Office recommends that all residents lock their cars, particularly at night, and keep a photographic record of the contents of their home, including serial numbers.