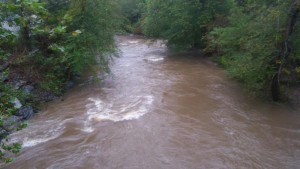 Swannanoa’s drought came to an end with a vengeance in late September and early October. Due to a stalled low pressure system, many Swannanoans saw ten inches of rain or more in a little over a week. Thankfully, the rain totals, though significant, did not reach the epic levels that had been forecast. Swannanoa residents were bracing themselves for historic rainfall and dangerous flooding, but our neighbors in South Carolina took the brunt of the storm. Residents there are still digging out from the devastation it caused.

The Swannanoa River was running fast and furious after the October rains, but our area escaped significant flooding.