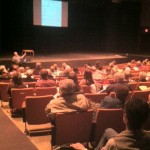 More than 100 people attended a December 3 public meeting called by the Environmental Protection Agency to address issues related to the federal Superfund site in Swannanoa. Those in attendance voted overwhelmingly in favor of creating a Community Advisory Group (CAG) to represent the interests of Swannanoa residents with respect to the site.

The Superfund site is located on 1,027 acres of land accessed off Old Bee Tree Road, near the former Anvil plant. The manufacturing operations on the site have been cloaked with a veil of secrecy since 1952, when Oerlikon Tool and Arms Corporation began producing explosives, guns, tear gas, and chemical warfare agents for the Unites States military. The property was most recently operated by Chemtronics, a subsidiary of Halliburton. The site was placed on the federal Superfund list in 1982; manufacturing ended in 1994.

At the December 3 meeting, EPA representatives reviewed the history of the site and described the remediation efforts that have been undertaken to date. Much of the meeting time was devoted to addressing resident concerns about the new sources of contamination that were recently found on the site. These sources – which are located around several demolished buildings – were not identified in the original site study in the 1980s, and therefore no remediation has taken place.

A study is now underway to determine the scope of the new contamination and develop a cleanup plan. That study, which will include a health risk assessment, is expected to be complete in March; the EPA plans to hold another public meeting in April to share the study results with the community. Given the time required for the necessary studies, approvals, and negotiations with the potentially responsible parties (former site owners), it’s expected that cleanup would not begin until 2016.

Given the excellent attendance at the meeting and the need expressed by residents for more information and interaction with the EPA, it quickly became apparent that there was more than sufficient support for formation of a Community Advisory Group. The CAG will be an independent group that will serve as a liaison between Swannanoa residents, the EPA and federal Superfund program, state agencies, and the companies that owned the site and are involved in the cleanup.

The EPA will set up the first CAG meeting and will send a notice of the meeting date and time to all those who expressed interest in being involved. It’s anticipated that the CAG will be up and running in time to participate in the decision-making processes when the new study is released this spring. If you were unable to attend the December 3 meeting, and would like to receive information about the CAG meeting, please email your contact info to whitsett.tonya@epa.gov or call 877-718-3752.

For more background information about the CAG, and to access a downloadable copy of the EPA’s Five-Year Review Fact Sheet for the Chemtronics Superfund Site that was released in November, please click here.