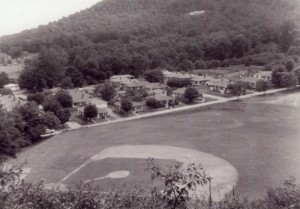 Now that baseball season is in full swing (pun intended), we thought it would be a good time to re-visit the glory days of Industrial League baseball in Swannanoa. Beacon Manufacturing always fielded a very strong team, in part because of the company’s practice of recruiting exceptional players to work at the mill. The baseball field that was built for employees and their families in Beacon Village saw heavy use by players of all ages, from pre-Little League to adults playing in the highly-competitive Industrial League. Playing for the Beacon team was a great honor; the men were very dedicated and practiced almost every day after work.

The Beacon baseball field was called Nolan Field until the mid-1950s, when the name was changed to Coman Field in honor of Herb Coman, a former star football player at South Carolina and personnel manager at Beacon. The photograph above shows Coman Field, Beacon Village and Dennis Street in 1961. Coman Field is now the site of a new 17-home Habitat for Humanity subdivision.